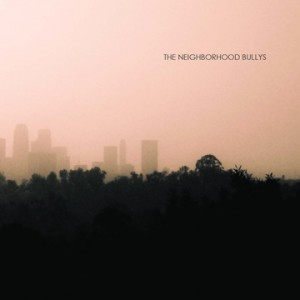 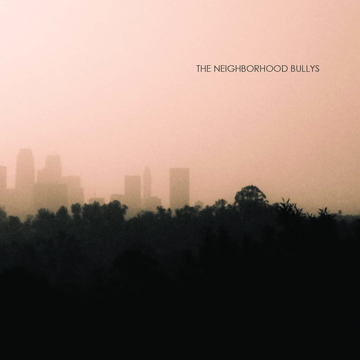 Click on image to see album EPK and hear the tracks. 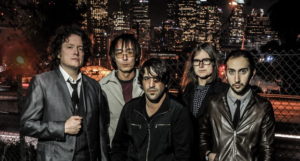 The Neighborhood Bullys are retooled, reinvigorated and ready to rock with a vengeance and a barrage of freshly-minted songs. The band, a staple of the Los Angeles club scene, is, as ever, fronted by whirlwind singer, songwriter, bass-player and producer, Davey Meshell. But he’s now accompanied by a new quartet of musical collaborators — guitarists Greg West and Sam Park, keyboardist Kip Boardman, and drummer Mike “Soupy” Sessa – who are ready to take the Bullys’ trademark blend of power-pop, punk-rock and R&B to greater heights.

The Bullys first stormed the Los Angeles club scene in 2006. Unleashing infectious melodies played with fevered skill and cleverly irreverent lyrics sung with epidemic energy, the quartet quickly conquered unsuspecting audiences and critics. It’s obvious that the Bullys are the embodiment of authentic rock and roll, right in line with predecessors including the Rolling Stones, the Ramones, and the New York Dolls. But they sweeten the pot with the hook-wise smarts of The Killers, the new-wave bounce of The Knack, the glam-rock crunch of Slade, the proto-power-pop punch of Raspberries, the party-metal jubilance of Kiss, and the lean, mean R&B/pub-rock blast of Dr. Feelgood.

Encountering the Bullys’ talent and enthusiasm via a demo of the song “I’m Bored, Let’s Fight,” Mike Chapman — legendary producer of Sweet, Suzie Quatro, Blondie, Pat Benatar, The Knack — was inspired to capture that energy in the studio. The result was the band’s potent, rollicking debut album: the provocatively-titled “What?” – which was released on Rankoutsider Records in early 2010 to critical acclaim and considerable college-radio airplay. A party in song form, it included the insanely catchy “Spin It,” the sexy pulse of “Lead With Your Lips,” the hammerhead slam-bam of “Let Me Be Me,” and the rafter-rattling near-gospel fervor of “Alive.”

On top of their explosive sound, the Bullys’ songs are blessed with lyrics that are cynical, brutally honest, pointed and peppered with witty rhymes. As Meshell put it, “We don’t preach, or tell anyone what to do. We write about people, how they are, and how they live.”

The Bullys three-song single on the Ruf Mix label, led off by the rousing anthem “Fighter, Not a Lover.” Available on CD and via digital download in March 2013, the release will also include the new track “(Do You Have a) Boyfriend” and, as a bonus, a re-recording of the Bullys’ “I’m Bored, Let’s Fight,” which was a college-radio favorite in its original version on “What?” This will be the first of a planned series of singles to be issued by the Bullys over the next year. Eventually, the material will be compiled into a full-length album.

The lynchpin of the Bullys is the Brooklyn-spawned, L.A.-raised Meshell, who has played with such esteemed musicians as Shelby Lynne, Peter Case, Etta James, Bobby Womack, John Lee Hooker, the Chambers Brothers, Deana Carter, Buddy Guy, Buddy Miles, and Dwight Yoakum. “I come from a musical family,” Meshell said. “Mom recorded with Teddy Vann and had releases on Jubilee and Diamond records as and sang backgrounds for many major artists. Dad is a famous songwriter “Time to Change” by The Brady Bunch, and producer co-writer of two Chris Montez albums and co-producer of Lobo, “Me and You and A Dog Named Boo”. I had no choice. I popped out singing and playing drums, and I’ve been writing songs since I can remember. Eventually, I found the bass.”

Meshell belies his regular-guy look with the passion and moan of a vintage soul shouter. As the Bullys’ lead singer and composer, he has been the driving force of the band from the start, with other members coming and going. “All were amazing musicians,” Meshell asserted. “In fact, two of the current guys in Dwight Yoakam’s band were in the Bullys.” Over the past couple of years, Meshell only played the occasional show with the Bullys while assembling his dream roster of musicians. Meanwhile, he devoted his time to producing other artists and writing new songs. Those songs are ready, and a band line-up has solidified.

Sessa, a California native, first hooked up with the band as a fill-in for ailing or missing-in-action drummers, and it was such a frequent occurrence that he stuck. A technically-astute studio rat and session player with a long résumé, he has toured with a number of diverse and significant artists including Cracker, Wanda Jackson, Fear, Rosie Flores, the BellRays, Wayne Kramer and Sylvain Sylvain. His first inspiration was watching “The Tonight Show” with his father and seeing drummer Buddy Rich hit the skins. “I practiced on pillows, playing along with records, until I bought my first kit with paper-route money,” said Sessa.

Moving to Los Angeles from New York City during his childhood years, West was a guitar prodigy inspired by the likes of Jimi Hendrix, George Harrison, Mick Ronson, and Jimmy Page. “Even as a kid, I loved the blues and anything rock and roll,” West recalled. He was a member of the L.A. band Billy Boy on Poison, but after a debut album and subsequent international tours with such bands as Stone Temple Pilots and Jet, the members of the group went their separate ways. Subsequently, West joined the Bullys, having met Meshell through a mutual friend. As West explained, they bonded over their love of kick-ass rock and roll.

When Meshell decided to add a keyboardist to the line-up, he asked rising Los Angeles-area Americana musician Boardman to become a Bully. Born and raised in Marblehead, Massachusetts, Boardman found artistic inspiration and some renowned collaborators after relocating to L.A., where he also records and performs as a solo artist often backed by Ray Lamontagne’s Pariah Dogs. Boardman frequently plays behind the angelic singing duo the Watson Twins, and has supported the likes of Tony Gilkyson, Randy Weeks and other performers.

Park hails from Massachusetts like Boardman, but lived in New York City for twenty years or so until moving to Los Angeles in 2005. “I’d known Davey for years from playing in bands around town, and I’d seen The Bullys a bunch of times,” Park said. “One day, the nickel just dropped into the slot, and he asked me to join.” Previously, Park was a mainstay of the regional buzz-band The Dark Horses starting in 1997 and continuing until 2007 when their break-up in 2007. Since then, he has sporadically spearheaded his own ad-hoc project, The Singers & Players Society, but now, he’s committing to the Bullys.

With an upcoming tour of the Pacific Northwest and the Midwestern United States set to promote the release of their new material, the Neighborhood Bullys are poised to expand their fan base beyond their devoted Southern California and collegiate constituents. According to Meshell, they are relishing the opportunity.

“Rock and roll can be like a battle every minute in the studio and every night on stage,” said Meshell. “But we’re all there because we believe in what we’re doing. What can I say? We all love loud rock ‘n’ roll.”

Needless to say, the Bullys are coming to your neighborhood – and they’re bringing the party with them.

“The Neighborhood Bullys touch a number of rock and roll cornerstones from soul to punk to early Stones swagger to post-modern Knack power pop tight fit songs that burrow into your ears and stick with you for weeks. They have the attitude in both their music and their lyrics that makes you want to take a run at the stage and pogo your brains out before crashing into some tables on the way to getting another beer or three at the bar.”

“Hooky melodies…joyful energy…hilarious and exuberant. The band rocks along…tight as brand new hot pants and twice as bright. The Bullys sound as excited as toddlers at a birthday party, and they want to share that buzz with us.”

“The Bullys performed to a packed house at the Viper Room. The band’s upbeat and smooth-as-jelly performance garnered screams and hollers from the crowd throughout the entire set… Tight, fun and able to draw a crowd.”

“THE NEIGHBORHOOD BULLYS ARE THE BEST F%$KING ROCK & ROLL BAND IN LOS ANGELES.”