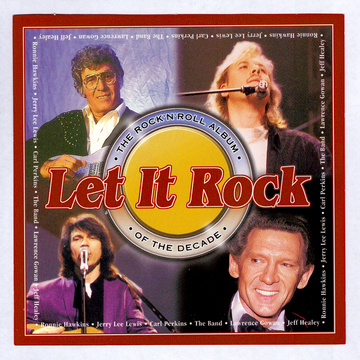 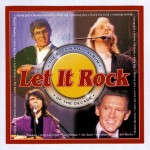 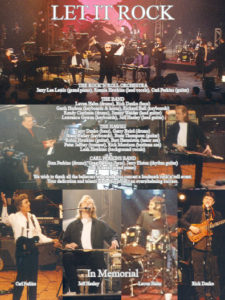 Let It Rock – At The Crossroads of Rock and Roll

The documentary is a concise look at the evolution of rock’n’roll transporting us through a spellbinding presentation where both music history and legendary interviews and performances converge. It stars many of rock’s iconic figures as well as its unsung heroes.

Let It Rock – At The Crossroads of Rock and Roll is a sound track and documentary featuring many eclectic interviews and stories with some of the founders and mainstays of rock and roll including Carl Perkins, Jerry Lee Lewis, The Band and Ronnie Hawkins. It is the story of good old boys, getting together to have some fun, just one more time. As they reminisce about the days gone by, one of these southern souls sounds a chord regarding the true birth of rock and roll. Carl Perkins, the son of sharecroppers, admittedly recounts how it was the music of the folks picking cotton on the family’s cotton fields that instilled in him a love of music, an influence that would eventually establish him as one of the all time greats in the world of rock and roll. Without African Americans and the social climate of the period, things may have been a little bit different. Racism was fanatic and segregation was running through the Deep South like the muddy waters of the Mississippi. Music was definitely “At The Crossroads”. The social climate of the time allowed rock and roll to prosper, as Sam Philips, the legendary founder of Sun Records took southern rock and roll and rocked the nation.

In the beginning, there were three southern rebel rousers by the names of Elvis Presley, Jerry Lee Lewis and Carl Perkins, all on Sun Records, who have been credited for creating rock and roll. Today there’s only one remaining – ‘The Killer’, Jerry Lee Lewis. Jerry Lee has never been more enthused or inspired about playing rock and roll than he is in this documentary, which was produced under the guise of Arkansas born Rockabilly Ronnie Hawkins’ Sixtieth Birthday Bash. While the audience enjoys some good old rock and roll performed by an all-star cast at this award-winning concert, the documentary explores the social climate in America and the effect American rock and roll had in Great Britain and in Europe in 1956, an effect that continues to this day and is responsible for America rediscovering its musical heritage. The documentary pays tribute to the great blues legends WC Handy and Robert Leroy Johnson, as well as some of the unsung heroes of rock and roll such as Jack Earls, Jay Chevalier, Art Adams and Janise Martin who was billed by RCA in 1956 as “The Female Elvis”.

Through the documentary, viewers will enjoy the frantic pace of the Hemsby Rock’n’Roll Show, Britain’s oldest rock and roll show that makes you feel as if the clock stopped in 1955. They’ll take the ride to “Blues Highway” to “Highway 61 and Beale Street” and get a whole new perspective on the birth of rock and roll at the Smithsonian’s Rock’n’Soul Museum. Learn the secret behind the success of Memphis as the “Mecca” for American Music. Hear the original Sun Records Rhythm Session drummer J. M. Van Eaton recount the early days at Sun Records in person from the Sun Studios at 706 Union. Billed “The Creative Drummer” by Jerry Lee Lewis, some have said it was J. M.’s drumming style together with a syncopated connection to Lewis that put The Killer’s music on the map. Witness some never before seen rock and roll history and enjoy the heart-felt stories of second-generation rockabilly Stan Perkins, the late Carl’s youngest son, as he recounts some incredible stories about his legendary father.

After listening to this exciting, jam packed audio rock doc one thing will be clear – a lot was going on in Memphis, Tennessee in 1954 and black music was the impetus for giving white audience a lot of enjoyment right to this very day. With all the fun and good times that rock’n’roll takes credit for, it was truly the blues, the chants and wailing in the cotton fields that was at the heart of rock and roll and that continues to shape popular music even today… lest we forget! 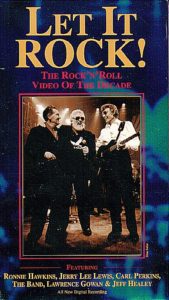 Click here to preview on all online services to get the album.