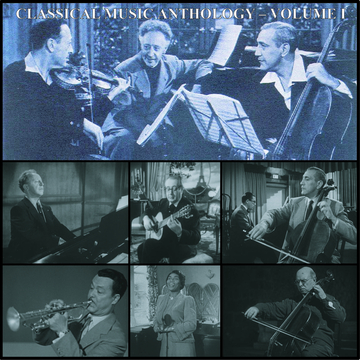 CLASSICAL MUSIC ANTHOLOGY – VOLUME I
It has arrived! Classical Music Anthology is a collection of unique classical music performances. This treasure-trove of the best appearances by some of the world’s greatest classical artists of the Twentieth Century featuring the forgotten performances by Jascha Heifetz, Artur Rubinstein, Gregor Piatigorsky, Andres Segovia, Marian Anderson, Pablo Casals, Rafael Mendez and more is a real gem! All recordings have been re-mastered and boast intimate performances captured on film.

Included in the collection are rare performances by Jascha Heifetz, Artur Rubinstein, Gregor Piatigorsky, Andres Segovia, Vronsky & Babin, Rafael Mendez, Marian Anderson & Pablo Casals. These eclectic recordings represent a treasure-trove of musical greatness. Each recording has been audibly enhanced for the digital age, so they will not be forgotten and will be continually enjoyed by future generations of classical music lovers. The performances which have been captured on film have been preserved by the producers for the production of a documentary. The documentary series will not only be a masterpiece of rarely seen film footage, but it will be an educational, inspirational and intimate look at what goes into making an Olympian in the world of Classical music.

Click here for all online services to get the album.

For more information, contact Steve Thomson at (416) 291-4913 or via e-mail at steve@backstageproductions.com